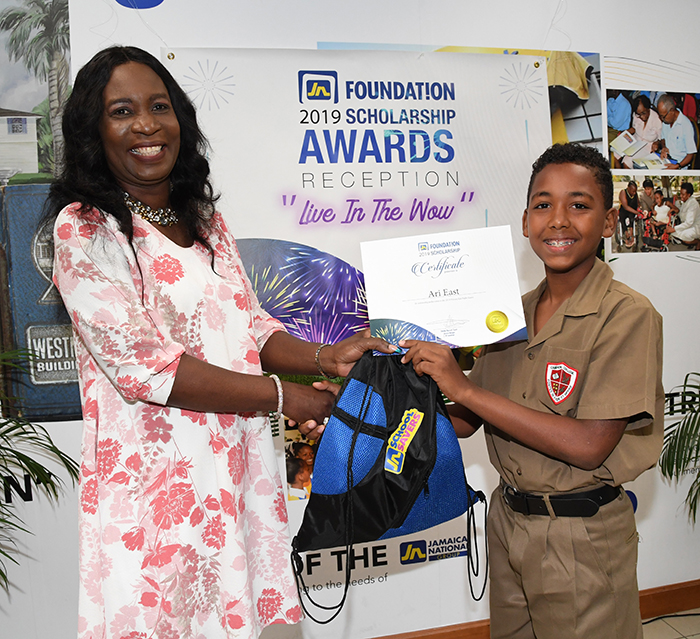 The news that her son, Ari East, had received an academic scholarship from the JN Foundation, based on his performance in the Primary Exit Profile (PEP) ability test, came as a shock to Annaleise.

Her amazement wasn’t because she doubted his abilities, but because she knew the year leading up to the exam had been a difficult period for the family.

Mrs East was diagnosed with breast cancer just before the beginning of the new school year.

“I started chemotherapy in September, when he went into grade six. Therefore, I wasn’t able to help him with his exam preparations as much as I would have liked,” Mrs East recalled.

“It didn’t really matter to me what school he passed for and a scholarship was never on my mind. Ari has always been a diligent student and a hard worker; so, I wasn’t worried about how well he would do in his studies,” she related.

The mother of four, who endured three surgeries, chemotherapy and radiation treatment during the course of the year, is now cancer free.

“God is good,” Mrs East said, as tears streamed down her face. “I’m not crying because I’m sad. These are tears of thanksgiving,” she said. “I am so grateful to God for his faithfulness.”

Mrs East also sees her son’s recent success in the PEP exams as a testament of God’s goodness.

“To God be the glory. I feel like he is just smiling down on our family,” she said, affirming that, “This scholarship from JN Foundation is like a gift from God. This may be insignificant to others, but for me it is something much deeper. It is a sign from God.”

Ari, who attended Vaz Preparatory, was among the first cohort of students to sit the newly introduced PEP exam.

He received a grade of ‘highly proficient’ in all subjects, namely: Language Arts, Mathematics, Science, and Social Studies. He also scored 100 per cent in Mental Ability.

Ari’s performance not only secured him a spot at the prominent, Campion College, but it also landed him a scholarship from JN Foundation. He was among 37 PEP students, who were awarded five-year scholarships by the organisation.

The first former, said he found the PEP exam to be a bit of a challenge, “although it was easier than the work I received in class as practice.”

In terms of his exam preparations, Ari stated that his main secret was to pay attention in class and to stay on top of his school work.

“I just listened in class and try to do my work,” he said, explaining that he was not typically someone who studies into the wee hours of the night. “If it’s necessary, I will, but my mother always tells me that you need rest for your brain,” he informed.

Ari, who is the second of four children, said he believed that it is important to be a well-rounded student; and in addition to his schoolwork, he also ensured that he remained physically active and spent time socialising.

“I had a lot of fun in grade six. It wasn’t really all about books and getting worried about PEP. It was a lot of fun. Every day I would go outside and play football with my friends,” he said.