Ashleigh James is the JN Foundation’s GSAT Scholar for Kingston 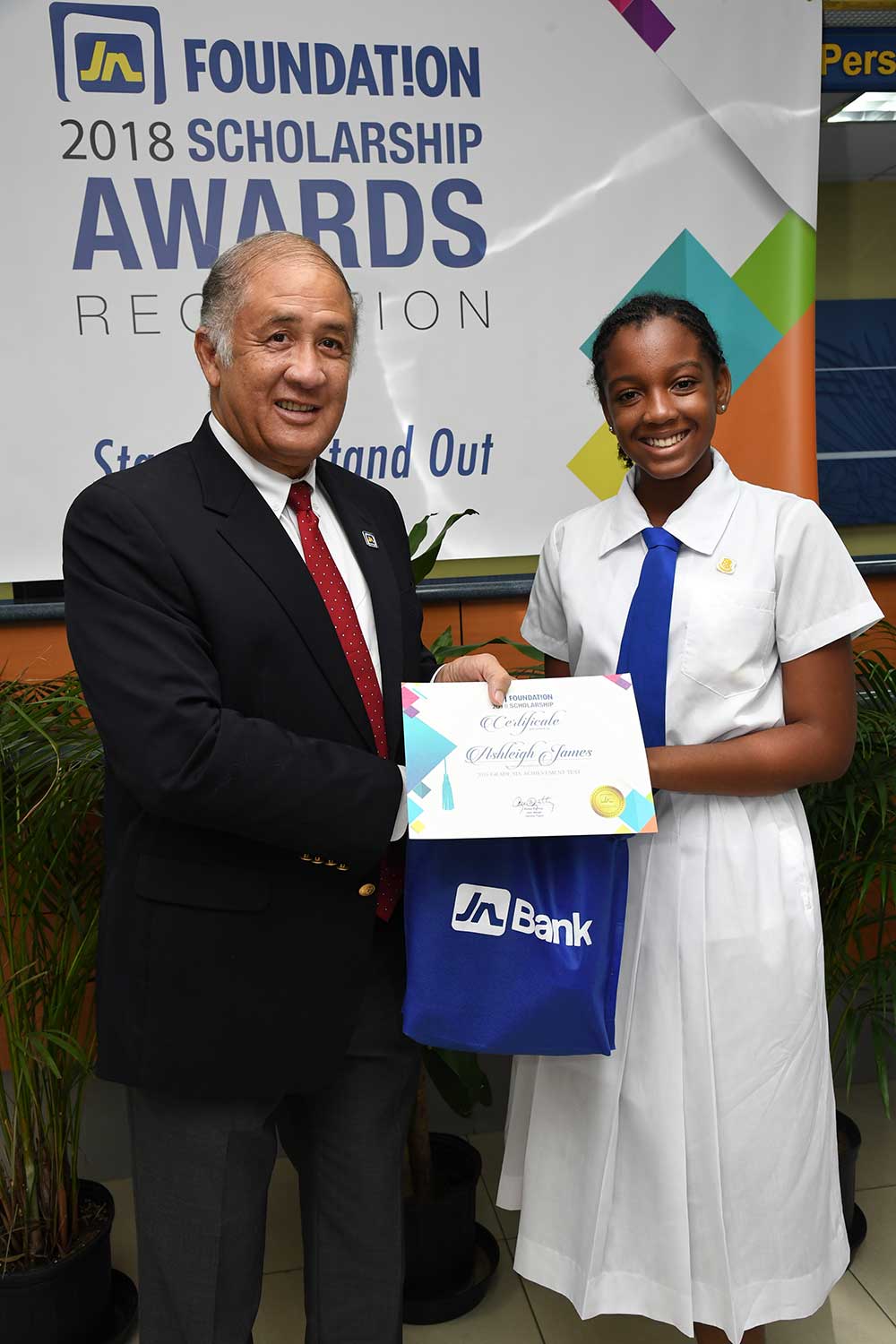 “I never settle for mediocrity,” is the bold statement made by Ashleigh James, the 2018 JN Foundation Grade Six Achievement Test (GSAT) scholarship recipient for Kingston.

This commitment to excellence has so far marked the short, but commendable academic career, of the 12-year-old, who has consistently excelled in her studies since starting school at three-years-old.

It was, therefore, no surprise to her parents and teachers when Ashleigh’s GSAT scores were revealed, recently. She received 100 per cent in Science, Language Arts, Communication Task and Social Studies as well as 96 per cent in Mathematics, resulting in an average score of 99.2 per cent.

“She has always been consistent in her school work and takes great pride in whatever she does. Therefore, I certainly wasn’t surprised at how well she did in the GSAT. I’m very proud of her and extremely happy for all that she has achieved so far,” said her mother, Roshelle James.

Mrs James also expressed gratitude to the JN Foundation for awarding her daughter a five year scholarship. “I am happy that the JN Foundation has rewarded her for her hard work and efforts. I know going to the school which is your first choice is reward enough; however, it is also good when other persons recognise you for doing well.”

Ashleigh was among 37 top performers in this year’s GSAT who were awarded five-year scholarships by the JN Foundation at an awards reception held at the organisation’s Chief Office on September 9.

Ashleigh’s performance in the GSAT has earned her a place at the school of her choice, Immaculate Conception High. “I chose immaculate, because I was always fascinated with how the girls looked in their uniforms. I was also impressed with their demeanour and how they act, and told myself I would like to be like them when I get older,” she informed.

The JN Scholar said she’s looking forward to life at Immaculate, where she hopes to continue to excel in her studies and participate in several extra-curricular activities.

“Once I’ve settled into the flow of high school, I intend to surpass my performance in primary school. I plan to do even better, because I never settle for mediocrity,” said the outspoken 12-year-old.

Ashleigh said she also plans join several school club including PAWS, which is an animal rights group that educates people to be compassionate and respectful of all animals as well as the tennis club.

The St Catherine native is also an active member of the Greendale United Church in Spanish Town and is also a talented dancer, specialising in ballet and modern dance.

Looking to the future, Ashleigh informed that she hopes to become a medical doctor, specialising in obstetrics and gynaecology.

“I want to become an OB/GYN, because when my mother was pregnant with my little sister I used to go along to some of her doctor’s appointments, and I found it really interesting, especially the medical terms that the doctor used. Therefore, from a young age, I decided that’s what I wanted to do,” informed Ashleigh.