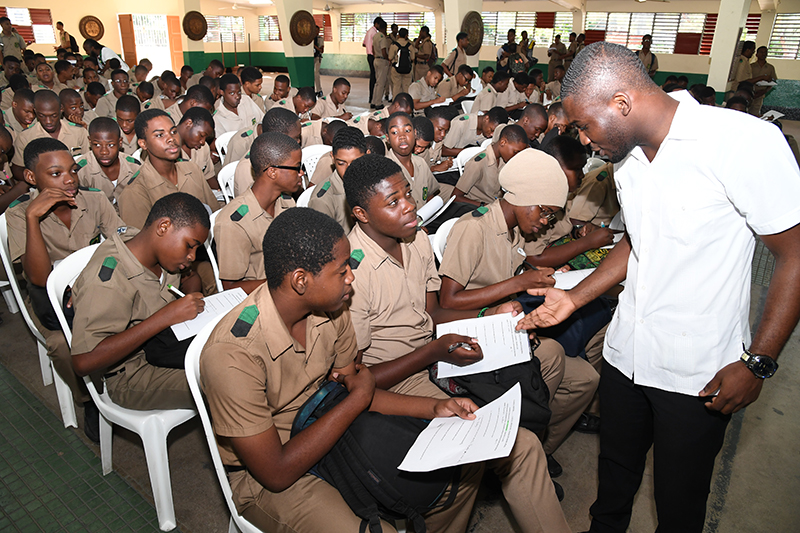 Rushard Blake, learning support officer at The Jamaica National Group, interacts with students prior to the start of the Youth for Arts & Recreational Development (YARD) Empire gender-based violence sensitisation session held at Calabar High on February 21. The event was organised by YARD Empire under the theme, “Jamaican Boys Becoming Men.”

Close to 500 upper school boys at Calabar High were challenged to be changemakers of society during a gender-based violence sensitisation session held at the school recently.  The event was organised by the Youth for Arts & Recreational Development (YARD) Empire, under the theme “Jamaican Boys Becoming Men.”

“You are the men of the future, you are the future of Jamaica. If you want to change society, you have to change yourself and create the Jamaica you want to live in,” Rushard Blake, learning support officer at The Jamaica National Group, charged the young men.

Mr Blake, who directed the discussion on the topic, “Men Do Cry”, commended the boys for their mature stance, most of whom agreed that is ok for men to cry.

“The first thing you did when you were born is to cry. It is the sign of life, so why are we so afraid to cry?” he reasoned.

“Crying is one of the most intense emotional expressions in humans, but males are often told that they should control their emotions.  Regardless of what you think, crying is something natural that we should engage in. Males are humans, and we have emotions too,” he said.

The 24-year-old Mr Blake urged the boys not to have reservations about crying when feeling overwhelmed, as crying helps to release pent-up emotions. He used a balloon to illustrate his point.

“The more I inflate this balloon, it’s the bigger it gets. Once it reaches its capacity, it is going to burst,” he emphasised.

Making the connection that suppressing one’s emotions can result in serious implications, he drew reference to Jamaica’s suicide statistics.

“Of the 61 persons who committed suicide in 2018, 56 were males and only five were females. Do you realise women have a better handle at controlling their emotion?  Why? Because we believe men mustn’t show emotion.”

He, therefore, cautioned the boys to be careful of the friends they choose so that they won’t be influenced to supress their emotions.

“The people who you associate with have a lot of control over how you react,” he advised.

He shared findings produced by Professor Ad Vingerhoets, a clinical psychologist at Tilburg University, which indicates that women cry between 30 and 64 times a year, while men only cry between six and 17 times a year.

Rajhel Williams, a fourth-form student, was appreciative of the opportunity to participate in the seminar. Like many of his colleagues, he agrees that it is okay for men to cry to vent their stress.

“A man is usually depicted as strong, and weakness is much like crying.  So it is oxymoronic to associate the two in the eyes of this insensitive society, but it is needed. This is because one’s flaws is what make them human, so since crying is a common human response, it is okay,” he emphasised.

“The presentation has shown me that it is ok for both men and boys to cry because when you don’t express that emotion, it can physically destroy you such as you getting high blood pressure.”

YARD Empire is a not-for-profit, charitable, non-government organization which seeks to influence change through participation and exposure through the performing and visual arts with a view to optimize youth potential.