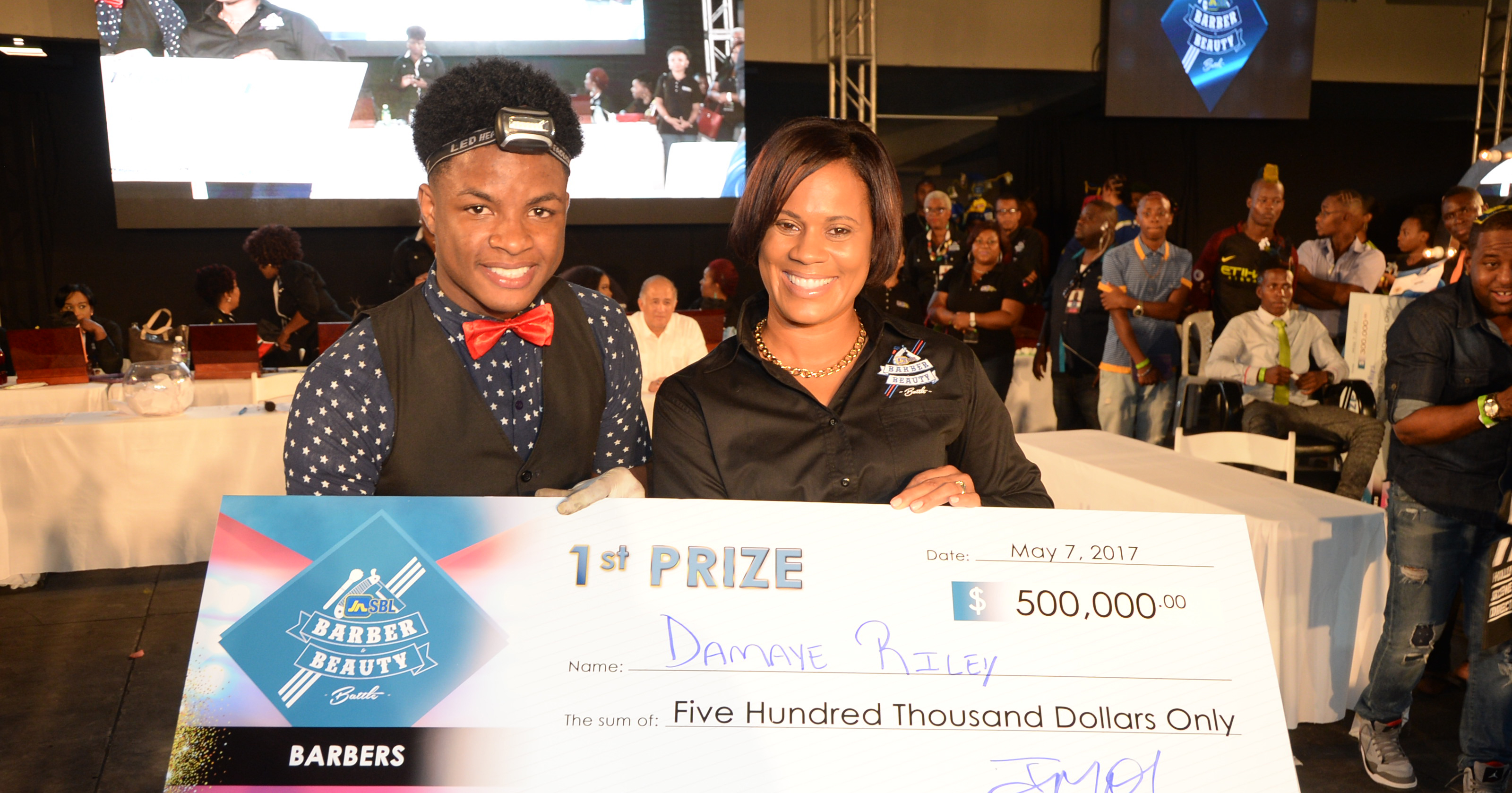 At age 21, Damayo Riley supervises five other persons at a salon in Grand Cayman. On Tuesdays, which is his day off, he reads books about leadership and business management.

An avid reader, he is quick to point out that what he is reading is not for enjoyment; it is for “edification,” as he strives to fulfill his dream to operate a full-service salon in Jamaica, in a few years.

Mr Riley is the 2017 winner of the JN Small Business Loans (JNSBL) Barber and Beauty Battle.  He finished ahead of previous winners Marlon Phillips and Sly Scott in the barber category of the competition; and, although he was the youngest entrant to win the competition, he was not daunted by the challenge.

“My work days start at 9:00 am, from Thursdays to Saturdays, and I work until 8:00 pm or 9:00 pm, sometimes longer, serving about 30 clients in a day,” Mr Riley explained. “It is challenging to supervise staff and cut my clients’ hair; however, since I have been here, I have learned a lot about myself and I continue to grow.”

Speaking about his clientele, many of whom have varied requests, he said, “My clients range from a few months to as old as mid-80s. They request varied styles from a simple haircut to a Mohawk, which I don’t mind doing. Some clients request art and patterns, which allows me to catch up on my skills in that area.”

A past student of Bellefield High School in Manchester, Mr Riley has been in The Cayman Islands since last August. He applied for the supervisor post at the salon after a friend told him about the job; and recommended him, based on his work ethic, while he was employed to Spa Utopia in Mandeville, Manchester.
“She always encouraged me to challenge myself; and referred me shortly after I won the JNSBL Barber & Beauty Battle,” he explained. Since settling in Grand Cayman, he has been building his ‘brand’ by marketing his work through social media and referrals.

“When I arrived in Grand Cayman, people had already heard about what I did in the JNSBL Barber & Beauty Battle. And, as soon as others found out and also saw what I could do, they came from all over Grand Cayman to have me cut their hair. Some of them even refer to me as: ‘Jamaica’s number one barber’,” he stated.

“Mr Riley impressed the audience at the National Arena last year with the quality of his work during the competition,” she stated. “Later, he went to Trinidad and Tobago in August to represent Jamaica, and finished in the top three, in all his categories. I am pleased that he has been doing well in The Cayman Islands; and, I am confident that he will do well as an entrepreneur. I wish him success in all he undertakes.”

Mr Riley started cutting hair at ten years old. First, he cut his own hair and practised until he was able to cut the hair of his friends.

He also plays the bass guitar at his church, the United Brethren in Christ, in Manchester; and has mastered other skills in the beauty industry. In addition, he does barber art, make-up, skin care, massages and piercing. He taught barbering at the Trendsetter Institute in Mandeville; and hopes to own a full-service salon in Jamaica, within four years.

“I plan to become an entrepreneur and create employment. Jamaica is the perfect place to offer this service because many persons are serious skin care and other aspects of beauty care. It would also help me to use my skills as a Master Barber,” he stated.

Although he was certified through HEART Trust/NTA prior to the competition, Mr. Riley appreciated the additional knowledge he gained through the JNSBL Barber and Beauty Battle.

“I learned how to manage my time and to be more professional. The seminars also helped me to focus on my goal to become an entrepreneur,” he explained.

In addition, he gains business knowledge from the books he reads about leadership and business management; and, he plans to gain certification in these areas.

“I love what I do, and realise that business management courses will assist me to be  more successful. Therefore, I plan to upgrade my knowledge and skills, so that I can better serve my clients,” he declared.