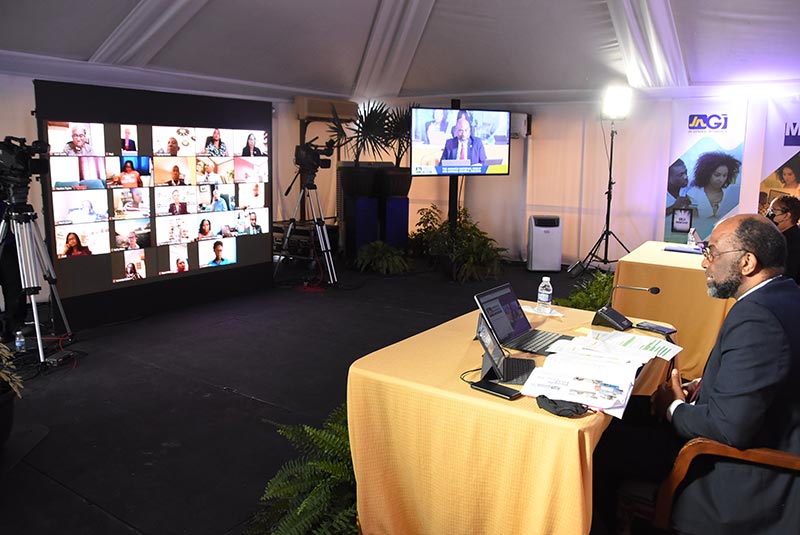 The Jamaica National Group made intense capital investments during the financial year ending March 2020, as it sought to further strengthen the Group’s operations, improve service to members and to its employees, as well as expand its reach.

Among the intense investments was the expenditure of £25 million to establish a digital ‘challenger’ bank in the United Kingdom. The set up allows customers to open an account in a mere five minutes and access a loan in 11, as long as they provide the requisite documents.

“Many of you will recall the factors that led to that decision, which was really the absence of correspondent banking services, as you have all come to learn over the past year or two, in the UK we were literally chased out of banks, as no one wanted to bank a Caribbean entity,” Earl Jarrett, chief executive officer, told some 458 members and guests during the JN Group’s 4th Annual General Meeting, held largely virtually for the first time in the organisation’s history.

The lack of correspondent banking services had resulted in operating costs growing exponentially to more than 42 per cent over a three-year period in the UK.

JN Bank in the UK officially launched in October last year, with the company being allowed to start operations without undertaking the normal probationary period required after receiving a licence. The bank, which is the first Caribbean-owned commercial bank to launch operations in the UK, is seen as a testament to JN Group’s strong business acumen and ability to operate at the highest international standards.

During the financial year, the organisation also commenced efforts to establish a similar commercial bank in The Cayman Islands, with the conversion of its building society, JN Cayman, into a commercial bank.

“That application is now with the Cayman Islands Monetary Authority for review and we are very optimistic that they will be supporting the application,” Mr Jarrett disclosed.

The conversion to a commercial bank will allow JN to provide “more dynamic financial products and services, driven by innovative technology, to better meet the evolving needs of our customers,” Mr Jarrett explained in his report published in the Group’s annual report.

He added: “A commercial banking licence would enable us to increase the deposit and loan portfolios, grow the JN brand, and support the expansion of our remittance business, JNMS Cayman Limited, through the provision of correspondent banking services.”

Complementing its investment in expanding its footprint in commercial banking regionally and internationally, the Group also invested in positioning itself as an international service provider, with the acquisition of the Phoenix core banking system. Its member company, MC Systems, acquired Phoenix for some US$4.5 million.

“Phoenix brought with it clients from all over the world, including the Caribbean, South America, the United States, Canada and Africa,” he said.

The platform is targeted to small banks and credit unions mainly.

Beyond the acquisition of Phoenix, however, the Group also invested in a new queue system to better manage customer inflow and traffic in its JN Bank branches and provide even more comfort for customers.

“It assesses the person in the branch and what he wants to do and queues him according to how long the service is going to take, so you won’t have somebody, who is doing a quick transaction, standing behind somebody who is doing a longer transaction,” Mr Jarrett explained.

About $40 million was also invested in upgrading the bank’s online banking platform, JN Bank LIVE, to allow members to serve themselves easily and conveniently online; while additional ATMs, including Smart ATMs, were deployed to further enhance its modes of convenient banking.

Similarly, it also invested in the deployment of JN Money Online, giving customers in its overseas markets the option to also send money to Jamaica using an online platform, instead of visiting an agent or branch.

The Voice, Britain’s largest black newspaper, which is also owned by the JN Group, switched to a largely digital mode of distribution.

During the financial year, the JN Group also commenced the investment of more than $2 billion, over a three-year period, into digitalising aspects of its business. Among the projects is an initiative to automate some decisions in the credit process across its member companies that lend. That project is being complemented by another to better link the Group’s lines of business, so that members can seamlessly access various products and services through the use of a personalised card.

Those investments are being complemented with the roll out of a new customer management software, which it began implementing in July 2019, to better manage leads and customer information so that its sales teams can generate better solutions for its members.

Towards the end of the financial year, the Group also began preparations to improve access to services for its employees. The JN Group CEO revealed that some $19.5 million was invested to transition its employees to remote working- outfitting its more than 40 per cent remote-working employees with electronic tools and software licences to support them to work safely from their home environment. That investment was followed up with the strengthening of its HR systems to allow employees to access, on their own, services they could only normally access while at the workplace.

“We recognise that the world will never get back to its own ways and we will certainly enable employees who would wish to work from home to do so, having established a process in which it can be done and ensuring productivity is maintained,” said Mr Jarrett.