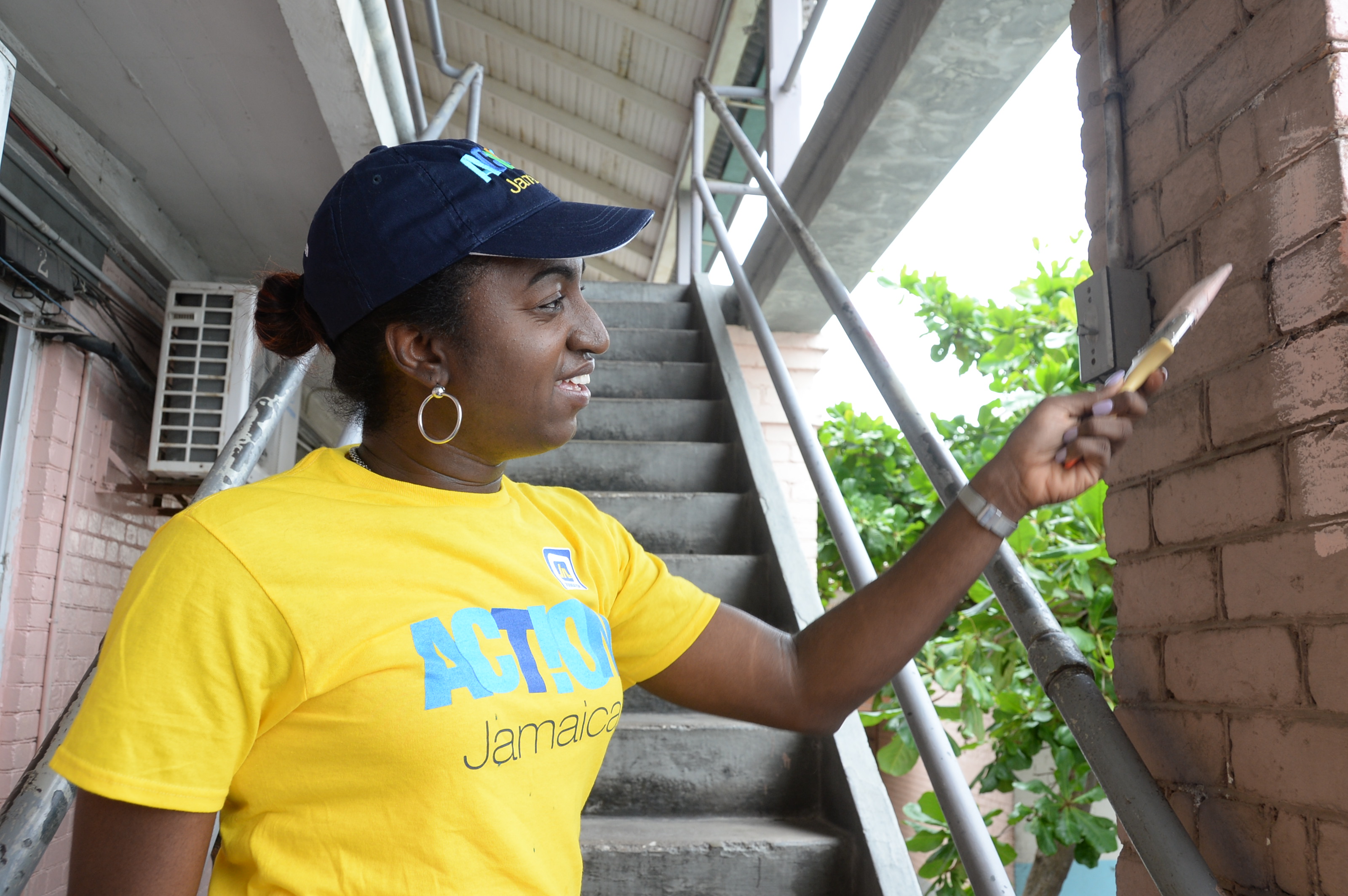 Scores of employees of The Jamaica National Group and tens of volunteers in the JN Foundation’s ACT!ON volunteer corps, laboured to enhance police stations, lock ups and schools in 14 communities across the country.

Among the main entities which received the attention of employees and volunteers was one of two national projects: the Central Police Station, downtown Kingston’s main police facility.

More than 60 JN Foundation ACT!ON volunteers and employees of the JN Group joined persons from other corporate entities and government, to give a needed facelift to the nearly 100-year-old police station.

Constructed in 1919, Commissioner of Police, George Quallo, acknowledged that the working conditions at the Central Police station were not ideal; however, the efforts by volunteers to improve the aesthetics will help to boost the morale of members of the Jamaica Constabulary Force (JCF) who report for duty there.

“National security cannot be seen as the sole responsibility of the National Security Ministry and the JCF. It impacts every aspect of national life; and, as such, it ought to be a priority for every well-thinking Jamaican,” he said.

“I am heartened by the volunteerism displayed across the length and breadth of the country,” he continued noting that many corporate entities were doing similar work at nine police stations across the country.

Prime Minister Andrew Holness and Opposition Leader, Dr Peter Phillips who were also on hand to participate in the Labour Day activities at the Police Station, thanked volunteers, singling out JN Group employees and the JN Foundation ACT!ON corps, and underscored the importance for good police relations in the community.

“Having this as national Labour Day project is symbolic. The people have come out to rebuild and preserve the physical symbol of law enforcement to protect and to serve,” Prime Minister Holness emphasised.

Noting that the facilities have not expanded in keeping with the increase in the city population, Dr Phillips said there was a need to look at improving the facilities at the Central Police Station in this vein.

“It is good that we are here today to do voluntary work as citizens of the country, even in the absence of the resources the Prime Minister would like to apply,” he said.

Extolling the work of the police as public servants, Dr. Phillips said Labour Day activities must not only be seen as work to enhance community infrastructure, but a moment to celebrate workers’ contribution to the movement responsible for Jamaica’s independence from Britain; and their continued role in sustaining the nation.

Saffrey Brown, general manager, JN Foundation, said JN’s participation in the Central Police Station project was an opportunity for the organisation to deepen The Jamaica National Group’s strong partnership with the police.

“It was important to assist the police, as we do a lot of work with them in road safety; and we wanted to support the revitalisation of the capital city, which is also our home. We are located just around the corner from the Central Police Station; therefore, we wanted show our support for the officers and the amazing work that they are doing,” she said.

Volunteers on Tuesday, repainted the Crime Investigations Bureau and the front of the police station; landscaped and planted trees.

In addition, JN Group and ACT!ON volunteers spruced up the Mandeville Police lock-up in Manchester; and the City Centre Police Station in West Kingston.

Westwood High School was painted by JN Group employees and ACT!ON volunteers, as well as other helping hands. The 134-year-old school was damaged by fire last month. And, children at the Prime Time Basic School in Denbigh, Clarendon also received a new roof over their heads, thanks to the work of the JN Group and ACT!ON volunteers in tandem with residents.

Other schools, which benefited from the volunteerism of the JN Group and ACT!ON corps included: the Rainbow Kids Centre in Morant Bay, St Thomas; the Sabina Basic School in Portmore, St Catherine; and the Jacobs Well Basic School in Falmouth.