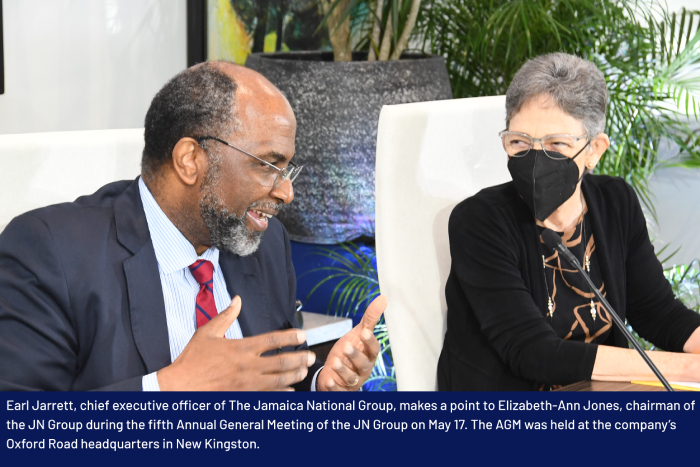 The Jamaica National Group’s capital strength sustained its business during the COVID-19 pandemic.

A transnational organisation, the JN brand has a strong network that includes operations in the diaspora market- the United States of America, Canada, the United Kingdom and the Cayman Islands, and is among the three largest financial conglomerates in Jamaica.

It maintained jobs and salaries during the period, while investing deeply in the digitalisation of various aspects of its operations. This was done despite an upward movement in its debt portfolio.

In fact, the organisation expects growth in key areas as the globe gradually emerges from the first pandemic in more than a century.

“As Rahm Emanuel, former US Chief of Staff, said during the global depression in 2009: ‘Never allow a good crisis to go to waste. It’s an opportunity to do the things you once thought were impossible’,” Earl Jarrett, chief executive officer, told members at the organisation’s fifth Annual General Meeting on May 17.

During the financial year ending March 31, 2021, the Group’s assets grew by some $37.8 billion to $269.8 billion, reflecting an overall increase of 16.3 per cent, due primarily to increased customer deposits, long-term loans and investments.

The growth in its overall lending portfolio during the period was a marginal 5.5 per cent, up from $110.8 billion to $116.9 billion, which the organisation indicated was as a consequence of the restrictions in physical movement, general economic uncertainty, and lower than normal demand. This translated into marginal growth in loan accounts, which increased from 79,132 loans to 81,131 loans.

The number of savings accounts also grew marginally by six per cent to 985,246 accounts, however, there was an overall growth in deposits of nearly 23 per cent, from just under $139.9 billion to approximately $171.7 billion

At the same time, the JN Group’s investments increased by 34.7 per cent during the financial year, moving from $67.9 billion to $91.5 billion, due to increased funding provided to some member companies. Its external debt portfolio also moved upwards, with long-term loans increasing from $5.2 billion in the prior year to $15.1 billion. The amount included debt obligations associated with the purchase of secured bonds and receivables from the National Housing Trust (NHT).

Operating expenses also increased by $1.3 billion, or 7.2 per cent, to $20.1 billion, with the main factor being heavy investment in various projects, including efforts to strengthen credit assessment, delivery and member experience.

The strength of the Group allowed the organisation to carry on these activities to support its members and employees and to strengthen operating capacity, Mr Jarrett explained.

“Having been in operation for more than 148 years, we have witnessed severe financial and economic challenges which have negatively affected similar institutions. We are resolute that the effects of the COVID-19 pandemic, while devastating, will not break our spirits. As a Group, Jamaica National has the capacity to make the best of the challenges it faces,” the JN Group CEO summarised the organisation’s performance during the period.

“We have seized the opportunity to review our operations and to look at ways to grow by offering new service options and developing greater levels of efficiency within our companies,” he said.

“While there are many uncertainties ahead, I have utmost confidence in the JN team that we face these uncertainties from a position of considerable strength. We will emerge stronger for the experience and even more committed to building lifelong relationships and creating greater long-term value for our members and customers,” Mr Jarrett concluded.

The JN Group realised a surplus of $6.5 billion, up from the $619.3 million from the previous financial year.