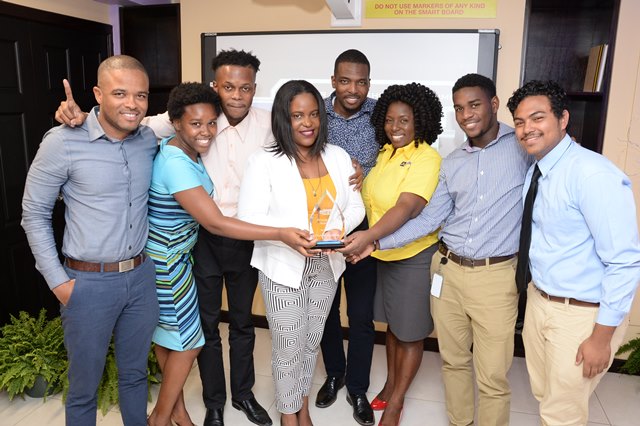 Tris-Ann Morris (fourth left),  Manager for Learning, Development and Performance,  JN Bank, shares the spotlight with members of the  winning innovation challenge team comprising  Jason McNeish (left), Marketing Manager, The Jamaica National Group and Ricardo Williams (fourth right), Business Relationship and Sales Manager, JN Bank, along with summer interns.  The occasion was the JN Project NEXT Mentorship Programme Awards Ceremony held at the JN Conference Centre on August 18.   Thirty-nine interns, who completed an eight-week summer internship with The Jamaica National Group, were recognised for their outstanding contribution to the organisation.

Thirty-nine interns, who completed an eight-week summer internship with The Jamaica National Group, were recognised for their outstanding contribution during the JN Project NEXT Mentorship Programme, at an awards ceremony, held at the JN Conference Centre, on Duke Street, downtown Kingston, on August 18.

As part of their professional development, interns were assigned JN mentors; placed in one of nine teams; and, were challenged to identify projects that could enhance The Group’s operational efficiency and productivity.

“The projects were innovative and reflected the organisation’s vision of being bold.  Also, the standard of the presentations was very high and clearly demonstrated that significant thought and preparation had taken place,” disclosed Pam Thompson, Chief – Enterprise Project Management, The Jamaica National Group, who was the chief judge.

The winning project was one that will improve customer service delivery.   The team included: Jariel Cherrington of The UWI;  Hanif James, Krystal Simpson, and Dimitri McLeod, from UTech; Gabrielle Ingram-Palmer, a UCC graduate; as well as, mentors, Jason McNeish, Group marketing manager and Ricardo Williams, business relationship and sales manager, JN Bank New Kingston.  The team was awarded the CEO’s Award for Innovation and each intern received a $20,000 JN Bank gift certificate.

The second-placed team proposed a project to increase revenue, while the third placed team presented a proposal to enhance people development.

“It’s awesome to have been on last year’s winning team and again to be on this year’s winning team,” Hanif James disclosed. “I am glad for the opportunity to participate in the programme and to be exposed to excellent customer service.”

Hanif emerged Top Intern, while Runners up were Kerece Stewart, a student at Caribbean Maritime Institute; Lindsay Pink of The UWI; and Jillian Lee of McGill University, Canada.  Most improved intern is Tanasha Wellington, a student at The UWI.

Tris Ann Morris, manager for Learning, Development and Performance, in the JN Group Human Resource Development department, pointed out that the mentorship and

internship programme, which has been ongoing for many years.

“We introduced The JN Project NEXT Mentorship Programme to provide opportunities for interns to integrate their knowledge and theory through practical applications on the job.  Furthermore, the interns were assigned mentors to guide their career and personal development,” Ms Morris disclosed.

Kerece Stewart, a third-year student at the Caribbean Maritime Institute, who was assigned to the JN Foundation, welcomed the opportunity to participate in the programme.

“This was my first internship.  The experience surpassed my expectations, and I had the chance to engage in projects which helped me to explore my potential,” she said.

Dr Renee Rattray, senior manager, Learning, Development and Culture, The Jamaica Group, explained that the summer internship programme is mutually beneficial to the organisation and students.

“This initiative is another way in which the JN Group impacts the lives of our country’s future leaders. The exposure interns received has assisted them to develop their competency, and prepare them for the world of work,” she affirmed.