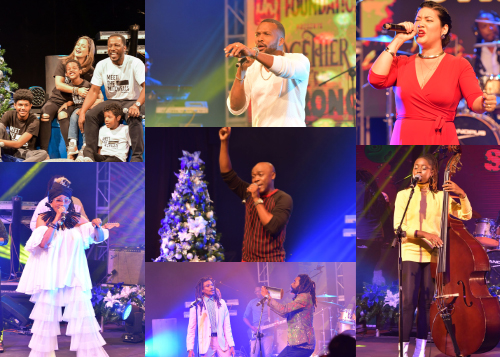 ‘Together We’re Strong’ serves up variety of Jamaican performing arts

The Jamaica National Group made good on its promise to provide a bountiful buffet of musical treats to kick-start Christmas, with an exhilarating concert dubbed “Together We’re Strong” on Christmas Sunday, December 20.

More than 40,000 people across the group’s social media platforms tuned in and remained glued for two solid hours of electrifying performances from instrumentalists, singers and poets; and for reminiscences of Christmas traditions, present and past.

The event, which was organised to raise funds for hundreds of vulnerable children cared for by the Mustard Seed Communities, provided a boon for the charity, currently reeling from COVID-19, which has significantly affected its sources of funding.

The show was capped by the ‘Queen of Reggae’ herself Marcia Griffiths- regally adorned in a white layered palazzo, with a complementing white top, black necklace- who did not disappoint in style or performance for her first concert in more than nine months.

She received virtual encores, as viewers, asked for more performances of her popular hits: Dreamland; the multi-generational success, The Electric Slide and I Shall Sing, which were all complemented by energetic, stellar dance moves.

The acclaimed 2013 Voice winner, Tessanne Chin, added to the vibrato of soaring performances, belting beautiful notes, which received a plethora of positive reactions from patrons on social media, who responded with fire emojis to show their pleasure with Chin’s ‘lit’ performance, and comments indicating about her set. Of note was her moving rendition of, what has now become a Christmas ballad, Mary Did You Know and her pre-Voice hit song, Hideaway.

JN Group brand ambassador, Kevin Downswell brought praise down on the house, as crooning soulful gospel from his catalogue of well-known hits; while fellow ambassador, Agent Sasco, represented dancehall with several of his conscious hits, including Almighty Protect Me.

No-Maddz, Sons of Mystro, Energy Plus mento band and newcomer,Jamila Falak, were among other local and international artistes on the line-up, which flowed seamlessly, adding to the diverse and dynamic mix of art and entertainment.

Music for a cause

In his message to viewers, Chief Executive Officer of the JN Group, Earl Jarrett, reminded patrons of the cause.

“As we celebrate the advent of Christ, who represents the ultimate gift to all mankind, let us, in turn, give to others in a meaningful way, as He has freely given to us. Each donation will go a far way in improving the life of a child at Mustard Seed,” he said.

“Your ‘mustard seed’ can grow into an ‘oak tree’ that will provide shelter for children in need. I encourage you to give generously as we are our brothers’ keepers,” he underscored.

Persons can continue to donate to Mustard Seed Communities by depositing or transferring cash to their JN Bank Chequing Account #: 20000155091, registered to Mustard Seed Missionaries. Transfers can be done online using JN LIVE online banking or making a local bank transfer (ACH or RTGS) from any bank in Jamaica; or simply depositing via any JN Bank Smart ATM or Drop Box.

Donations can also be made using a credit card at mustardseed.com; while Jamaicans and others overseas have the option to also visit a JN Money location or use jnmoneyonline.com. Fees have been waived for transactions conducted at a JN Money location.

In her summation of the concert, Member Ombudsman for the JN Group, Claudine Allen, expressed gratitude to Jamaicans and supporters of Jamaica, locally and overseas, for their support.

”We are very thankful for the massive outpouring of love from Jamaicans all over the world, and more importantly, the donations and pledges to support our vulnerable children through the Mustard Seed Communities,” she said.

She encouraged persons to continue to donate and invited them to relive the exciting concert via the group’s social media platforms.