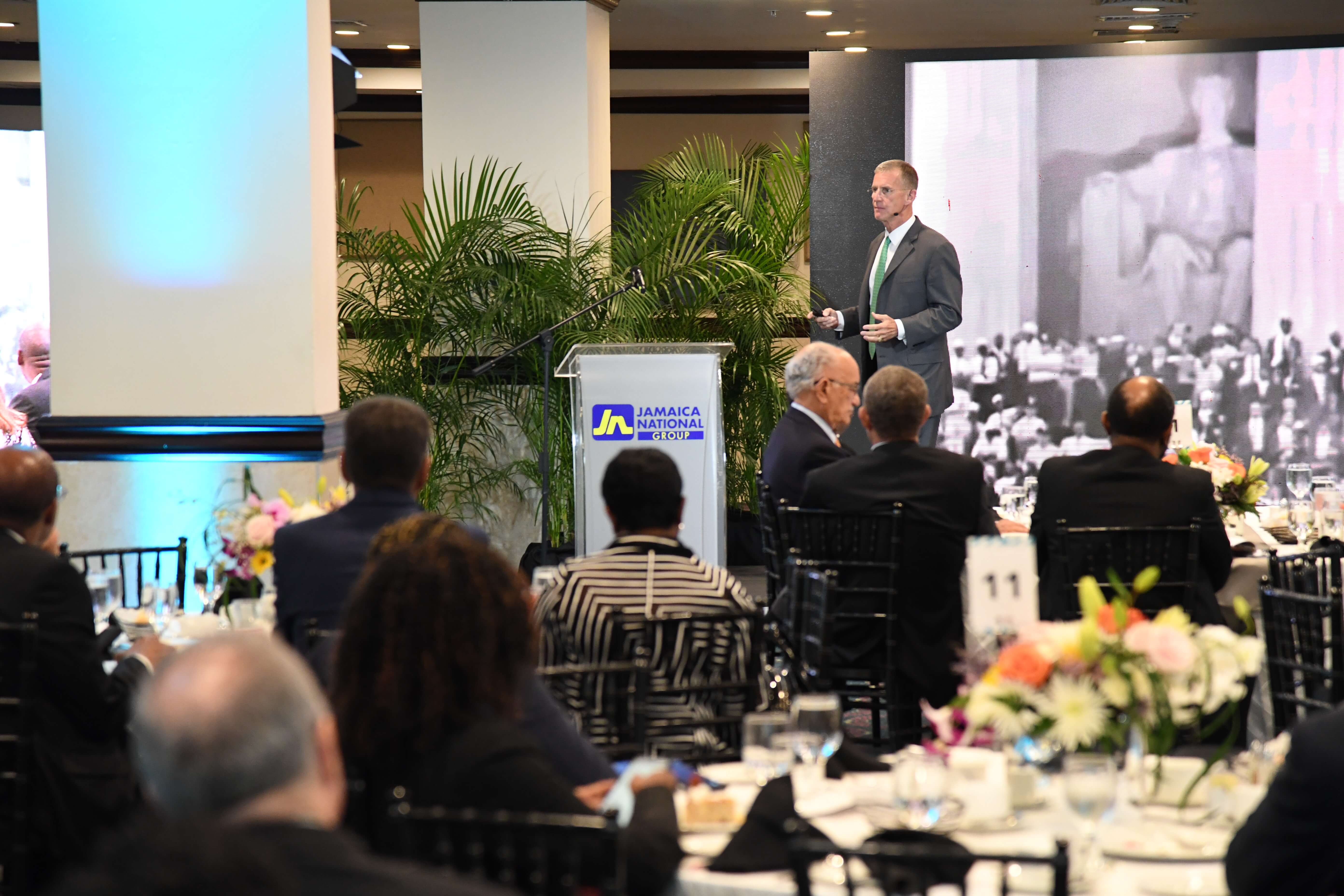 Retired four-star United States Army General, Stanley McChrystal, emphasized to Jamaican private and public sector leaders recently that a key touchstone of effective leadership is when an organisation is able grow and flourish even after its current leader has moved on.

The retired general, who now functions as an expert and author on leadership, was on a one-day visit to the country at the invitation of The Jamaica National Group to address private and public sector leaders at a lecture under the theme: Leadership in a Time of Change. The event was held at the Jamaica Pegasus Hotel late last week.

Reflecting on Dr Martin Luther King Jr’s leadership of the Civil Rights Movement for 13 years until his death in 1968 at age 38, General McChrystal emphasized that effective leadership is about creating a movement.

“And it’s not over, it hasn’t won, but Dr King moved it along,” he said as he played a clip from the civil rights leaders’ famous speech at the March on Washington in August 1963.

“Dr King wasn’t born to be a charismatic leader, he chose to be that…,” McChrystal emphasized, pointing out to leaders in the room that greatness was not beyond them, and that in fact effective leadership and legitimacy is built over time.

Among his other leadership lessons, the four-star general also underscored that an important part in positioning organisations to thrive is the ability to adapt to change. He said leaders play a central role in achieving change by inspiring their charges and those stakeholders who play a critical role in the attainment of the organisation’s goals.

“To people, from their vantage point, it may look like things are pretty good here, so sometimes you have to show them the big picture and show them that we are actually in great trouble. We all have to change, not just those people over there,” he said.

And in the face of major change, the general emphasized, risks must be taken.

“There is a truism in the military: if the enemy shoots artillery or mortar fire and it hits your position, you should move,” he said.

However, he said what normally happens in organisations is fumbling over what direction that should be taken.

“It doesn’t matter. Everywhere is better than here, and sometimes that’s true with change” he underlined.

He stressed that vision and values also play a crucial role in the sustainability of the organisation and, therefore, they should be clear and collective.

“Our boundaries have to be defining the vision [of] what we are about. What are our values? What do we care about? Because if we have to go outside of those [principles] to get to the objective, I would argue that we have lost,” he argued.

He also emphasized that staying true to personal values is important for leadership. Reflecting on the war against terrorists after the September 11, 2001 attacks on the United States, and the rage it immediately unleashed in America, including the military, he pointed out that as a leader, one has to step back and reflect before acting to ensure personal and collective values are not compromised.

“A nation has to do that as much as individuals do, but it’s a constant process,” he said.