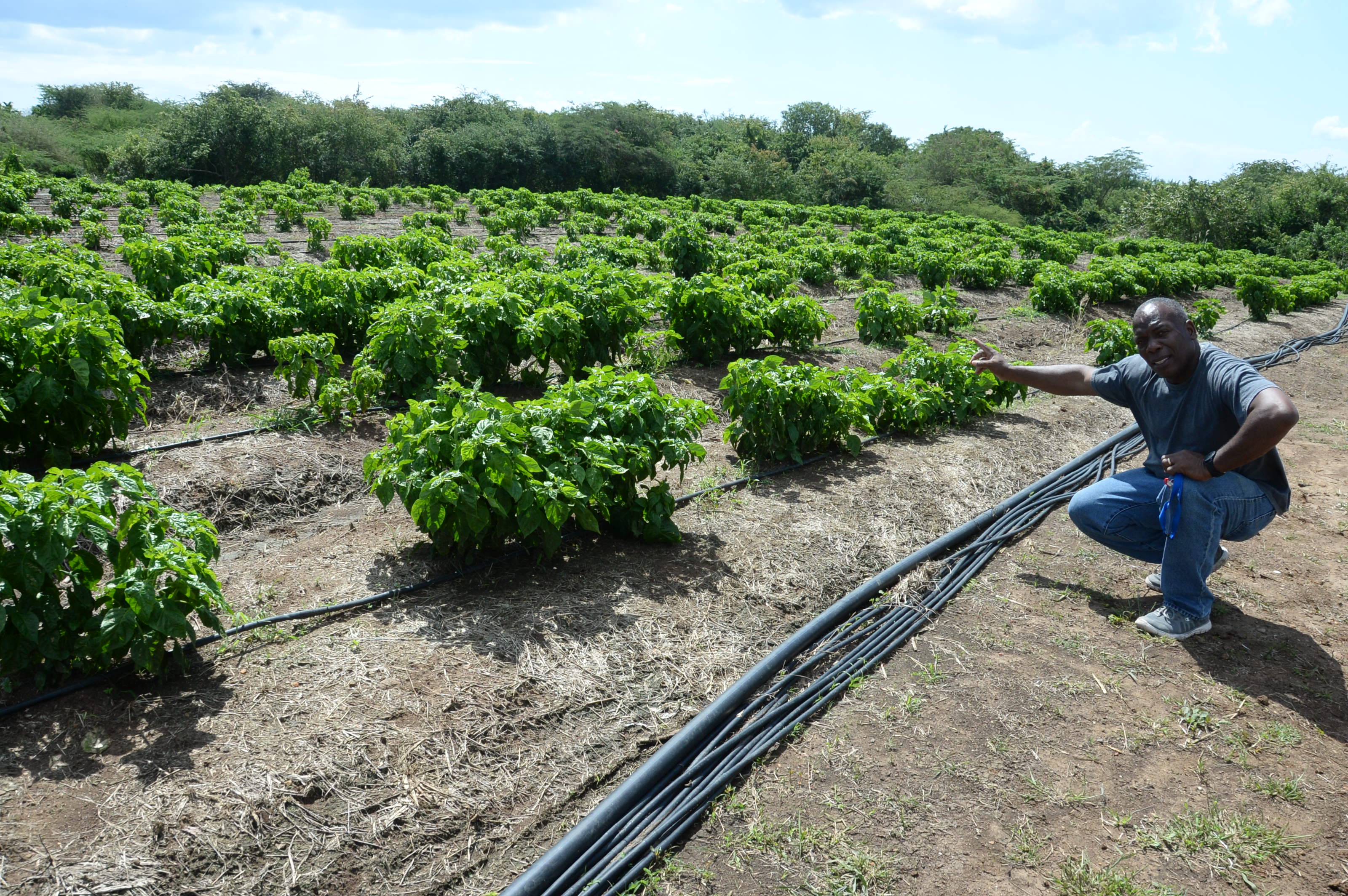 Randy Finnikin had just started farming in Colbeck, Old Harbour, St Catherine in late 2016, when heavy rainfall caused streams feeding a nearby pond to overflow their banks and flood his farm.

Subsequently, equally damaging flood incidents made him concerned about the predictions that the island will suffer from more floods and droughts, as global climate patterns become more unsettled. As a result, Mr Finnikin is learning to manage his farm to address these extreme weather conditions.

“I wasn’t aware of the history of the land when I was putting my business plan together,” he said. “Now, my challenge is that during heavy rain falls, the pond behind the land overflows, and has inundated the farm on three occasions.”

This was a shock to the community development manager and father of two, who has been in farming, in one way or another, for all of his life.  He started as a child, pasturing goats, prior to going to school in the mornings.  Later, he enrolled at Jose Marti High School, when it had primarily an agricultural focus, before working with several companies in the agricultural sector; as well as, in the correctional services, where he taught farming to inmates.

He decided to acquire land and start growing onions after learning that Jamaica had a high demand for the vegetable. After about one year, he had three-and-a-half acres of his farm under onion cultivation, and employed up to 25 persons, based on seasonal needs. And, he recently began clearing two additional acres to plant more onions, along with hot pepper and pumpkin.

“My dream is to have up to 15 acres of land under cultivation, with a section dedicated to poultry farming,” he explained.

However, to achieve that dream, he needed to overcome his environmental challenge. He came to realise that the fertile alluvial soil on his farm emerged from the fact that it is located within the natural basin of the pond, making it prone to flooding. 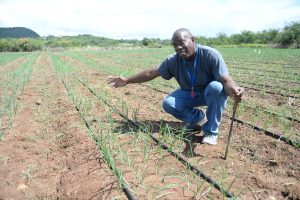 Finnikin shows his crop of onions which have been affected by flood waters from a nearby pond.

“I spend a lot of the time-off from my regular job learning to understanding how the water flows on the land, so as to prevent more damage to my crops,” he related. “That is when I am not digging trenches to get the water to flow-off.”

To assist him in dealing with the rains and the occasional dry weather, which has damaged his crops, Mr Finnikin turned to JN Small Business Loans after he heard a presentation from the loan company at a Farmers’ Cooperative meeting, which highlighted the JNBSL Climate Smart Loan product.

“Farming is capital intensive. If it was not for JNSBL, I would not continue to farm today,” he said, adding that the process of accessing funding was smooth.

“The loan assisted me to purchase more than 10,000 feet of hose, to install drip irrigation; and, to purchase other equipment, so that I could dig trenches to offset the problem of flooding.”

Gillian Hyde, general manager of JNSBL, in assessing Mr Finnikin’s journey to combat climate change, explained that the loan company was serious about assisting farmers and members of the micro, small and medium enterprise sector, to mitigate the effects of climate change.

She said that, “Mr Finnikin’s experience with flooding sheds light on how climate change has been affecting many farmers. That is why we have been working hand-in-hand with our agricultural clients, to ensure that they not only understand, but, also implement strategies to address this phenomenon. And, we remain committed to assisting Jamaicans, as they work to minimize the impact of climate change on their agricultural production.”

The general manager commended Mr Finnikin, who was ready to take on the climate challenge and, is using “best practices,” to combat its effect on his cultivation.

“I love farming,” Mr Finnikin declared. “For me, it is the equivalent of going to Hellshire beach, to relax,” Mr Finnikin said, adding that, “farming is no longer just about fork and hoe. It now involves research and awareness about scientific processes. More farmers need to adopt the best approaches, if agriculture is to remain viable.”