Tell us what the Opportunities Are! 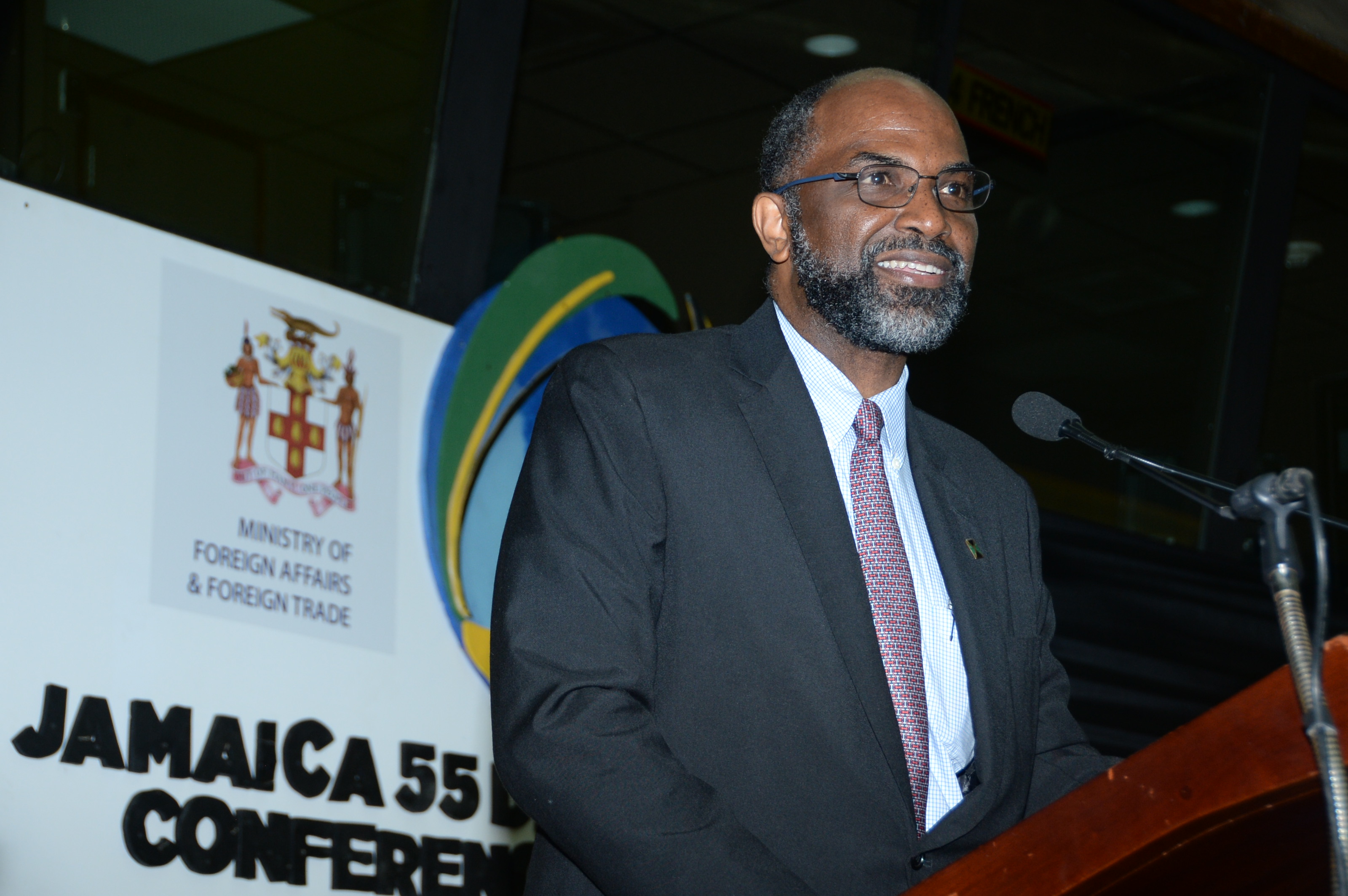 Earl Jarrett, Chief Executive Officer The Jamaica National Group and Chairman of the Jamaica Diaspora Foundation speaking during the Diaspora Growth Forum on Day 2 of the Jamaica 55 Diaspora Conference.

Government agencies and organisations are insisting that the state has madesignificant progress in developing the Jamaican logistics hub; however, some members of the Jamaican Diaspora remain unhappy about the flow of information regarding investment opportunities.

Speaking during the Diaspora Growth Forum, organised by The Jamaica National Group,at the Jamaica 55 Diaspora Conference, Michael Lee Chin, Chairman of the Economic Growth Council (ECG),emphasised that the project is moving forward. The Conference, held at the Jamaica Conference Centre, ended on Wednesday.

“This is an important national objective and we are going to make sure it’s brought home once and for all,” Mr Lee Chin declared. He revealed thatgovernment engaged a former Israeli Government Minister of Infrastructure, to assist in bringing the country’s logistics hub initiative to fruition. 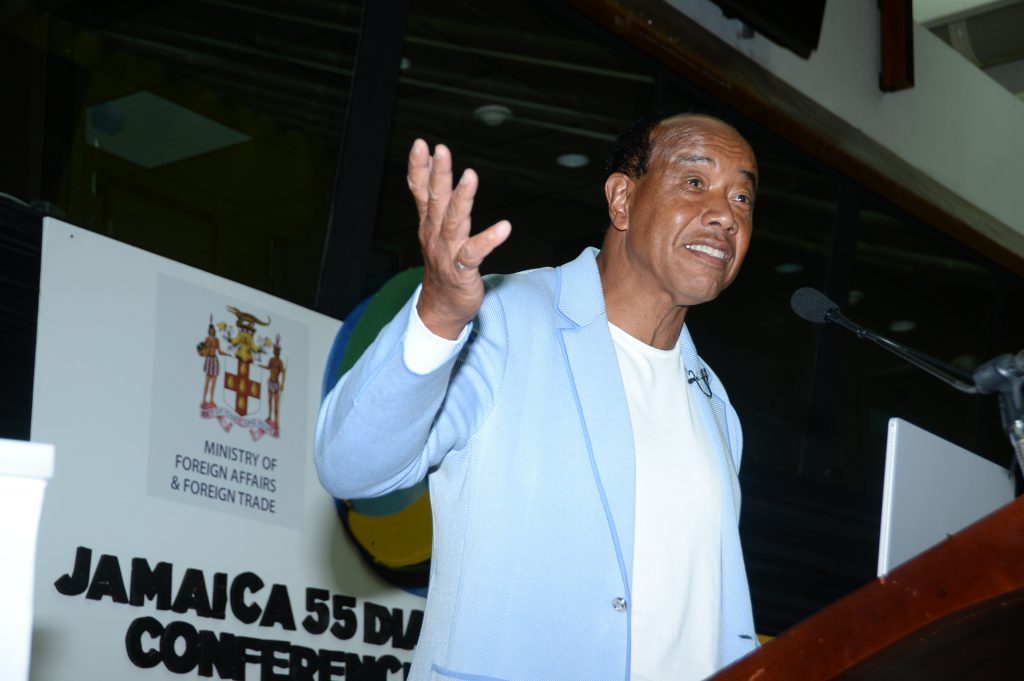 Michael Lee Chin, Chairman of the Economic Growth Council, speaking during the Diaspora Growth Forum organised by The Jamaica National Group on Day 2 of the Jamaica 55 Diaspora Conference.

“He was in charge of all roads, all toll bridges and all ports- airports; and, he is now working with us. And, he has given us access to his entire network,” the EGC Chairman disclosed. He also saidthat an emissary has been sent to Singapore to gather information about the Singapore model, as the government refines its recipe for establishing the logistics hub.

Also speaking at the Forum, Elva Williams, senior vice president, Finance at the Port Authority of Jamaica (PAJ), emphasised that Jamaica is prepared for logistics; noting that, the country has the infrastructure, which makes it prime for global investors.

She added that Jamaica was also viewed as the fastest rising country, in terms of its competitiveness, based on the global Logistics Performance Index (LPI), which indicates that in 2015/2016, the country was ranked 86th; today, ranks75th;and is number 9 in the Caribbean.

“We are geographically located, with global connectivity,” she said, also noting that the country has a diverse educational pool; and is the largest English-speaking country in the Caribbean. 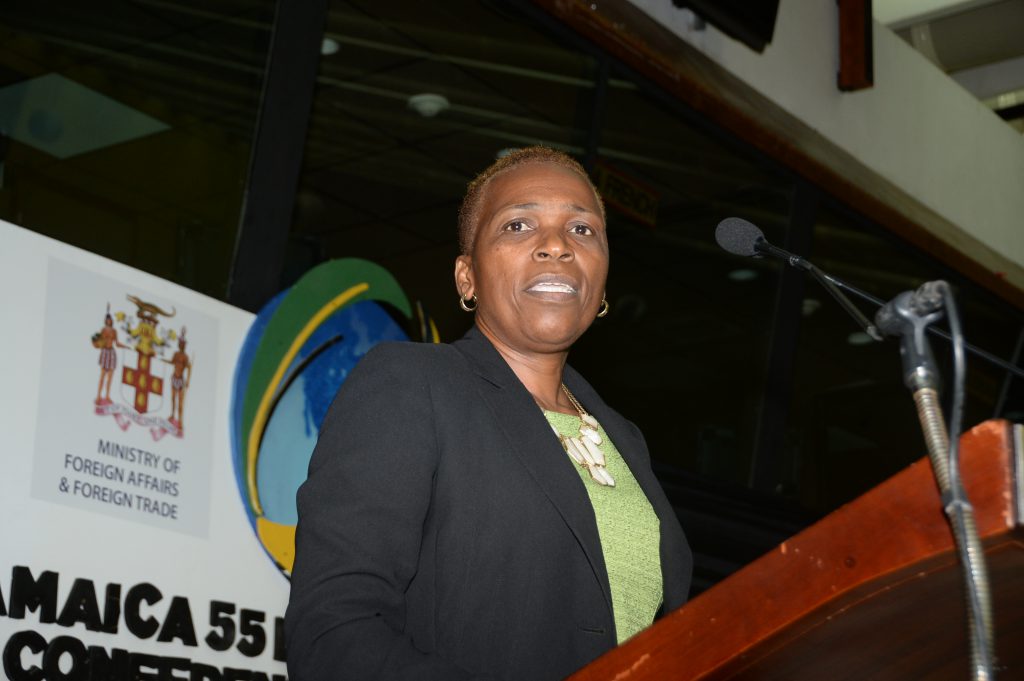 Elva Williams, senior vice president, Finance at the Port Authority of Jamaica (PAJ), speaking during the Diaspora Growth Forum organised by The Jamaica National Group on Day 2 of the Jamaica 55 Diaspora Conference. The eventw as held at the Jamaica Conference Centre in downtown Kingston from July 23-July 26.

“We have a good road network, whichgovernment continues to expand and develop,” she added. “And, importantly, we have stability in our democratically elected government; therefore, we have a stable political system, which makes us ideal.”

Ms Williams revealed that the government was also on track to completing some port developments, with two new berths at the Montego Bay Port to be completed during this financial year. These berths willhandle containerised and bulk cargo; as well as fuels; and a contractor has been engaged to start the project.

In addition, using the recent introduction of the ASYCUDA system at the Jamaica Customs Agency, she underscored that the nation’s ports are being modernised.

“We also have the legislative framework to support it,” Ms Williams added. “And,importantly, the rest of the world recognises us. Jamaica is one of the fastest rising in global competitiveness logistics,” she said.

However, the continued emphasis of the country’s preparedness is not enough for some members of the Diaspora attending the conference at the Jamaica Conference.

Beverley Johnson a Jamaican living in the United Kingdom,was among those who insisted that government provide specific information about what Jamaicans overseas can invest in, so that they can contribute to and benefit from the logistics hub initiative.

“Jamaica’s logistics space already exists,” Ms Johnsonaffirmed.“What is now necessary is for innovation to take place; and for governmentto give us a list of the possible areas people can invest in, such as: husbandry, port storage operations etc. However, while you keep coming to forums and telling us about the logistics hub, you are not telling us what’s really there; and how quickly it’s going to be done.”

In response, Edmond Marsh, vice president, Business Development at the PAJ, indicated that there are many emerging opportunities in support services that will assist to build out the logistics hub ecosystem. And, he contended that, there are opportunities emergingfrom the infrastructure government has been putting in place,such as roads and port development.

“What we need now is for locals and members of the Diaspora to put their money where their mouth is,” he said. “There are opportunities right now…as we speak.”

Acknowledging the observations of the Diaspora members, Earl Jarrett, Chairman of the Jamaica Diaspora Foundation and Chief Executive Officer of The Jamaica National Group, proposed that government look at establishing a website.

“That would also address the issue about ‘the list of things’ to be invested in,” he advised.