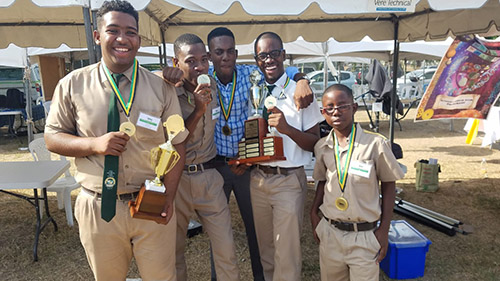 Students at Vere Technical High School in Clarendon have developed a solar-powered robot to assist small farmers with watering and fertilising their crops.

The robot designed by fourth form student John Simpson, and his three-member team, was the 2019 winner of the Katalyxt Youth Innovators Workshop and Competition, which was mounted at the Knutsford Court hotel, recently. Vere Technical finished ahead of Steer Town High School, which was second; while, Jamaica College and Guys Hill High School tied for third place.

“We have a greenhouse at our school; and we faced several challenges, because it is expensive to get a drip irrigation system in place,” John Simpson explained. However, last summer, as an electrical engineering student, I was introduced to a robotics programme, conducted by the Women in Maritime Association Caribbean (WiMAC), which brought me to another level.”

“I decided that, as a team, Quirece Barnett, Audley Lambert, Stefawn Lampart  and I, would innovate to incorporate both our knowledge of agriculture and robotics. We designed the robot to do irrigation; and it also does the planting of seeds, fertilising and watering,” he explained.

The 16-year-old stated that the robot was built from materials donated to the school. The machine runs on four wheels and is operated remotely. It is equipped with a solar panel on top, for electricity; and a slot for the containers, which provide water or seeds.

“It took us a few weeks to come up with the design and work out the challenges it would face. From there, we built a few prototypes to determine how it would function, and then made the robot. We received the parts to participate in a competition; but we weren’t prepared to enter. We then decided to use them for the Katalyxt competition,” he stated.
Simpson, who enjoys spending his spare time with family, stated that his dream for this invention is to see it being mass produced to assist local farmers.

“We did another project at school, which won the Scientific Research Council’s (SRC) competition; and later won the Katalyxt competition. We now have the support to put it on the market. I would love to see this robot mass produced, based on the value it could bring to Jamaican farmers,” he related.

Mr Kenardo Osborne, physics teacher at Vere Technical High School, who assisted the students to prepare for the competition, said he was proud of the team and their project.

“I am a person who likes to create and innovate, and I was happy to work with the students on this project. In Jamaica, we need more persons with creative backgrounds, and they showed their creativity,” he stated.

Mrs Jacqueline Shaw-Nicholson, communication and client services manager, JN Small Business Loans, whose parent company, The Jamaica National Group, was one of the sponsors of the competition, explained that entrepreneurship has the capabilities to fight poverty and reduce unemployment. Shaw Nicholson, who also spoke at the awards ceremony, commended the students for their amazing innovations, creativity, ingenuity and entrepreneurial thinking.

“We believe that investing in entrepreneurship will assist Jamaicans to achieve our Vision 2030 mission of Jamaica being, ‘The place of choice to live, work, raise families and do business.’ We are confident that these innovations, if implemented, will help to sustain job creation; and lead to the achievement of the economic growth we crave. We congratulate Vere Technical and wish them all the best in their endeavours.”

Winsome Minott, Chief Executive Officer of Mint Management and Finance Services, organisers of the Katalyxt competition, said the entries were generally of a high standard.

“We have been hosting this competition for eight years and each year it becomes more challenging to select the top three winners because students are competing at an increasingly higher level.  The competition has grown in number of entries, but also in quality. As a Jamaican, I am encouraged by the ideas and knowledge these youngsters have demonstrated today.”

John, who wants to be an electrical engineer is happy with the exposure he received from the WiMAC programme and the Katalyxt competition. He is also considering a career in entrepreneurship.

“As the years go by, we will see what happens. I definitely love electrical engineering and enjoyed this experience; therefore, we will see,” he related.

First mounted in 2012, the Katalyxt Competition provides young people with the opportunity to come up with fresh ideas about new products and services, which can   impact the lives of consumers, while preparing them with the knowledge needed to thrive as an entrepreneur.

This year’s competition had entries from more than 20 schools, with 12 entrants making it into the final stages of the competition.