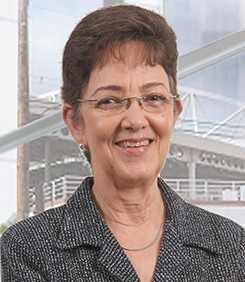 She is also a director of Radio Jamaica Limited and 1834 Investments Limited.

With more than four decades of professional experience in the accounting field in Jamaica, Ms Jones was head of KPMG’s Jamaican tax practice for over 30 years. Her work involved advising on local and international tax planning, including double taxation treaties; tax legislation; and liaison between clients and tax authorities on matters of assessment and incentives. A retired Senior Partner of KPMG in Jamaica, she is a previous chairman of KPMG CARICOM, a regional governance entity comprising KPMG member firms in the Caribbean.

Ms Jones has also served on several tax reform committees and was seconded to the Ministry of Finance, between 1989 and 1992, as special advisor to the Minister of Finance on taxation and related matters, in particular the implementation of the General Consumption Tax.

She was chairman of the Trade Board Limited and Fiscal Services Limited, and served on the Committee to Review and Eliminate Waste in the Public Sector. In addition, she served as a member of the Divestment Committee responsible for the divestment of sugar factories owned by the Government. She also represented The Private Sector Organisation of Jamaica on a committee to review the Government of Jamaica’s tax system.

Ms Jones is a Fellow of the Association of Chartered Certified Accountants and a retired Chartered Accountant. In 2015, she was conferred with the Order of Distinction, Commander Class by the Government of Jamaica.