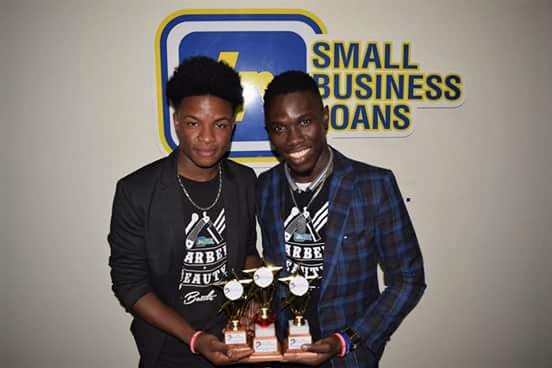 Damayo Riley (left) and Marlon Phillips display the trophies they won in Trinidad and Tobago.

Marlon Phillips and Damayo Riley have several things in common.

First, they were participants in the 2017 JN Small Business Loans (JNSBL) Barber and Beauty Battle. Then, both participated in the “Cut Yuh Style” Barber Competition in Trinidad and Tobago, in August.  And, along with Anthony ‘Barber’ King and Shanahue Dawkins, two Jamaican barbers living in Trinidad, they have established a team that will enter sundry barber and hairstyle competitions in the future.

Mr Riley, the winner of the 2017 JNSBL Barber and Beauty Battle and Mr Phillips, the 2016 champion, teamed up in August to enter the “Cut Yuh Style” Barber Competition at the Centre of Excellence in Port of Spain, Trinidad and Tobago.

However, the idea to create a team and start entering competitions would not have emerged if they had not received sound advice from a trusted source.

“We decided to start entering external competitions after having a discussion with Mrs Gillian Hyde, general manager of JNSBL,” Mr. Phillips pointed out. “She told us that we were talented; and, we could enter international competitions to show the Caribbean and the world what Jamaica had to offer, in terms of the beauty industry.”

“I thought about her advice and remembered that Anthony ‘Barber’ King, who participated in this year’s JNSBL Barber & Beauty Battle, told us about a competition in Tobago in which he did well. I then approached Damayo and we decided to enter,” he explained.

“It was a great experience. We interacted with some of the best barbers in the Caribbean; and Darrin Lyons, a master barber, who is one of the most successful barbers in the United States of America,” said the 20-year-old Mr Riley.

“We also received tips from Rob Di Original, who is a hair artist. It was a great event, as they gave us tips about how to be successful entrepreneurs and how to cut hair. I found this beneficial because it will assist me with my plans to own a salon and do hair art,” he explained.

At the end of the four days of competition, Mr Riley, who has been cutting hair since he was ten years old, finished first in the Fastest Fade competition; second in the Best Freestyle Design, and third in the Best Portrait segment.

Mr Phillips entered the Fastest Fade category and placed second and was third in the Most Creative Mohawk segment;
“The experience was good for me and I learnt a lot. It was just as intense as the JNSBL Barber and Beauty Battle; and the workshop about grooming were also beneficial,” he explained. He further added “The JNSBL Barber and Beauty Battle provided great exposure and preparation to participate in a competition like this.”

JNSBL supported Mr Riley and Mr Phillips for their trip to Trinidad and Tobago.

“When we spoke with participants in the third JNSBL Barber and Beauty Battle earlier this year, we encouraged them to showcase their skills to a wider audience because of the talent they demonstrated,” explained Mrs Gillian Hyde, general manager, JNSBL.

“We were proud to discover that most participants wanted to grow professionally, while becoming serious entrepreneurs. Consequently, when Mr Riley and Mr Phillips disclosed that they would be participating in a regional competition, we knew that they would represent not only themselves, but Jamaica as well. We congratulate them on doing well in the competition and wish them all the best,” she stated.

The barbers plan to enter other competitions; and are exploring participating in another contest in Tampa, Florida, in the United States of America, later this year. If successful, they plan to enter as a quartet, for the first time.
“Damayo Riley, Anthony Drysdale, Deshawn King and I have all been invited to another competition in Trinidad in November,” Mr Phillips revealed, adding that, “There is also one in Tampa, Florida, which we want to enter.”;

“We want to show the world that New York isn’t the only place that barbers can do hair art and cut hair well; and that Jamaican barbers can also do it. We might be from a third world country, but the members of this Barber Team have first world talent,” a proud Mr Phillips affirmed.