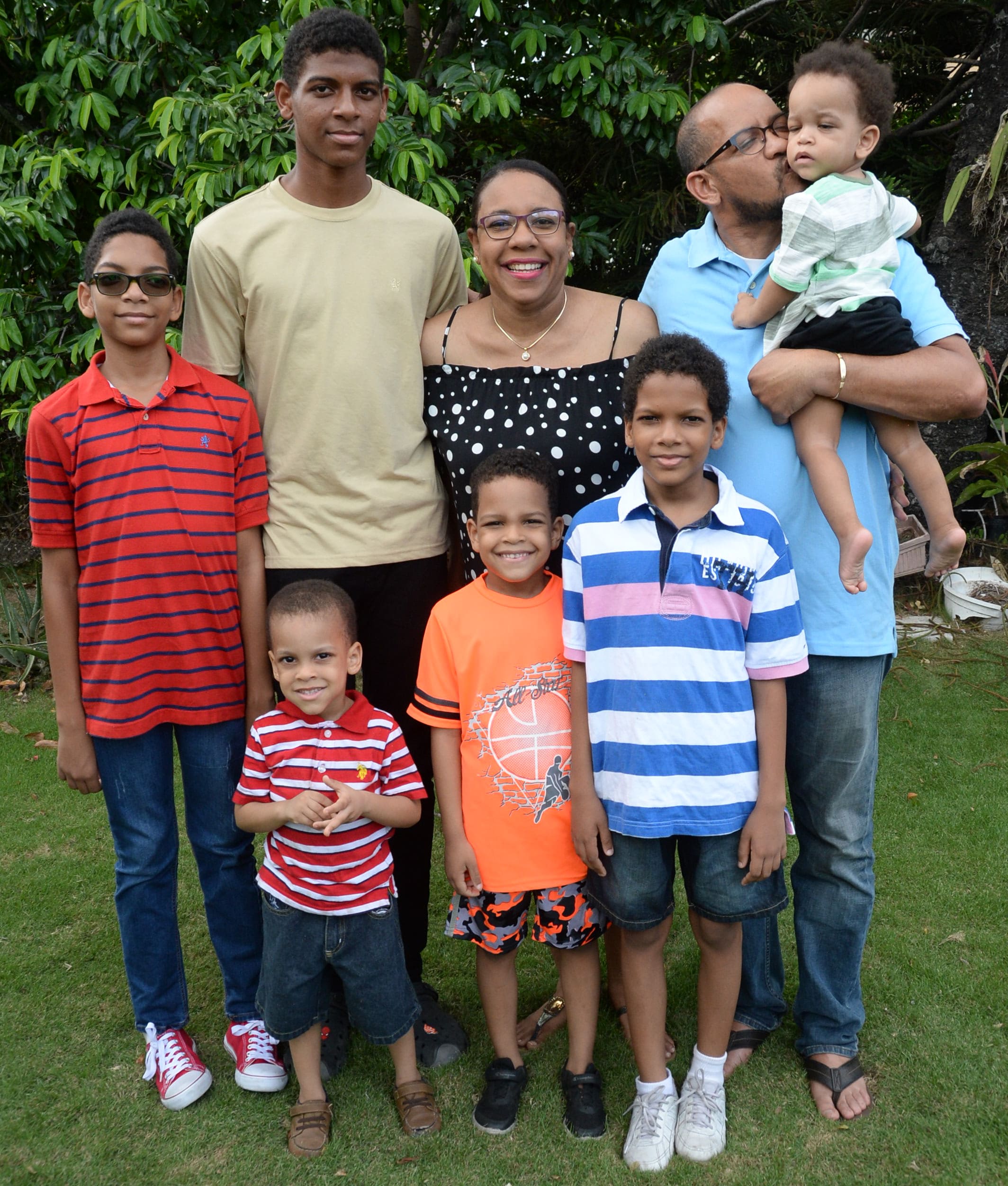 There are three questions that are frequently asked of Jason Riley when he is out with his six sons: “Are they all yours?”, “Are they for the same mother?”, and, “Where is the girl?”

He is neither perturbed nor repulsed by any of these invasive questions from strangers.  In fact, he actually expects them.  And, given his comical persona, he responds humorously to all of them, with repartees such as, “No, I borrowed them,” or “I just bought them wholesale and there was no girl”.

“There is hardly anywhere we go without people looking at us curiously,” he said with a chuckle.  “You see the different expressions on their faces and their eyes following you from a mile.  It’s usually an interesting experience when all of us are in public spaces.”

A Point-of-Sales Country Manager, at MC Systems Ltd, a member company of The Jamaica National Group, Mr Riley said that he maintains a close relationship with his sons, whose ages range from one to 14 years old.

“We enjoy doing things together, such as: watching TV, grilling chicken, playing football and video games, going to the barber and attending church.  We wash the car together and generally have fun wetting up each other, in the process.”

He noted that being separated from them doing the day usually results in a grand reunion when he gets home.

“The younger ones rush to greet me, and they want to be lifted up at the same time.  So, I’ll have one on my back and one in each arm.”

Mr Riley’s wife of 16 years, Natalee, pointed out that the children adore their father.

“He is an excellent father, a good provider, supportive and is always there for them.  He also encourages their friendship, which makes it easy for them to talk about anything,” said Mrs Riley, manager for employment and career services at HEART Trust NTA.

“We are blessed. They are very good children who do not give a lot of trouble.  They listen when spoken to, and they are always concerned about how we feel,” she added.

Their sons, in the order of their birth, are: Jared Craig, Jamie Christian, Joel Christoff, Joseph Carson, Jacob Caleb and Joshua Christopher.  A seventh son, Jessie Caleb, died of a heart condition eight years ago, at seven months old.

The Calabar and Wolmer’s Boys’ alumnus explained that it was intentional that all the boys have the initials, JCR.

Mr Riley, who is also from a large family of four brothers and one sister, said that he and his wife did not determine the number of children that they would have.  And, he hastened to clear the air that having so many children was not in an attempt to have daughter.

“Yes, we would love to have a daughter.  In fact, my wife was first pregnant with a girl, but miscarried at five months, after having appendicitis.  The boys, many times, say that they would love to have a sister. Well, I may not have daughters, but I’ll have six daughters-in-law, one day,” he quipped.

Jared, the eldest, declares his father to be the best dad in the world.

“He is caring and tries his best to make us happy and satisfied.  Even if he is low on money, he will make the sacrifice to ensure that we have the things we need.   He has a great sense of humour, is easy to talk with, and I am comfortable talking to him about anything,” he related.

Mr Riley describes himself as a “pro” at changing diapers.  He assists his wife with all chores and ensures that the boys do age-relevant chores, as well.

“They are required to keep their own space tidy, make their beds, put away toys and clothes, and help to wash the dishes,” he explained.

“My house doesn’t sleep at all.  The boys are all over the place.  There is a lot of noise, of course, and the occasional sibling rivalry and rough playing.  One of younger ones may be crying about something, and, then I have to be in the midst to restore calm.”

As expected, every expense in the household is high, with the supermarket bill being the largest.

“Food doesn’t last long in our house, at all.  We need to go to the supermarket every week, and sometimes twice for the week,” he disclosed.

Each morning, Mr and Mrs Riley are up by 5:00 a.m.  They prepare breakfast and get the children ready for school. The two older boys, who both attend St. Georges College, are picked up by a family friend, at around 6:30 a.m., and the rest of the household leaves out together by 7:20 a.m.

To transport his large family comfortably, Mr Riley is in the process of identifying a bigger vehicle.

“Currently we have a five-seater vehicle which is not convenient anymore. When we need to take the family to the country, we have to switch our vehicle with a larger one belonging to a family member, or a friend. We share one vehicle, therefore, we need to change that soon.”

Mr Riley, who had a close relationship with his father, endeavours to be a fine example to his boys.

“I try to give them what I didn’t have growing up and instil certain values, particularly advising them that material things are not what count.  We don’t have the best of everything, but we are happy,” he maintains.