JN to Lift Spirits with Major Concert on Easter Monday 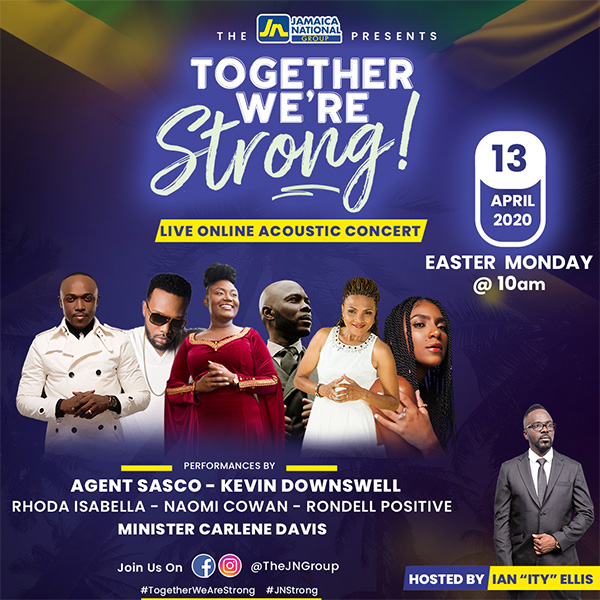 As restrictions on normal ways of life continue for Jamaicans due to the coronavirus disease 2019 (COVID-19), the JN Group will be seeking to lift spirits on Easter Monday with an electrifying fusion of contemporary reggae and gospel in a two-hour virtual concert being headlined by its JN Brand Ambassadors: gospel sensation, Kevin Downswell and dancehall entertainer, Agent Sasco.

The event dubbed the JN Group Together We’re Strong Concert, is scheduled for 10:00 am- 12:00 pm on April 13, and will be streamed via the Group’s social media platforms on Facebook and Instagram.

The event will be hosted by popular comedian, Ian “Ity” Ellis.

Earl Jarrett, chief executive officer of The Jamaica National Group, said the concert is being mounted to support Jamaicans locally and in the Diaspora, as they grapple with not only the economic and social disruptions caused by the outbreak, but also with the test that these difficult times have placed on their faith and spirituality.

COVID-19 has infected in excess of 1.4 million people worldwide and killed more than 80,000. In Jamaica, the infections have numbered 63 up to April 8 and three people have died. Government restrictions on movement have resulted in several countries, including Jamaica, where public gatherings, to include church services, have been curtailed; ports have been closed; work-from-home policies instituted, and nightly curfews implemented to slow the spread of the virus, which causes the disease.

“Many people have lost their jobs, closed their businesses and are mentally strained by the effects of all the restrictions. We now have to adapt to a ‘new normal’ in how we interact with each other in business and in our social lives or even as people of faith,” Mr Jarrett underscored.

“This concert seeks to remind us that we are a resilient people and that together we can overcome anything that seeks to test our collective spirit and relationships with each other and our relationship with our Creator.”

Fans will be able to interact with the stars as they perform live by posting their comments to the JN Group’s social media pages. They are being encouraged to use the hashtags #togetherwearestrong #JNStrong #JNCares #WeWillHelpYouFindaWay #HealingandHope

Under the theme, ‘Healing for the People; Hope for the Nation’, Mr Jarrett said the concert is aimed at bringing hope to Jamaicans, locally and overseas, during these difficult times.

“We are stronger together as a people and the JN Group is empowered to play its part in continuing to help Jamaicans to find a way during this difficult period,” he said.